Celebrity bloggers: the implications of a blurred personal and professional life on social media 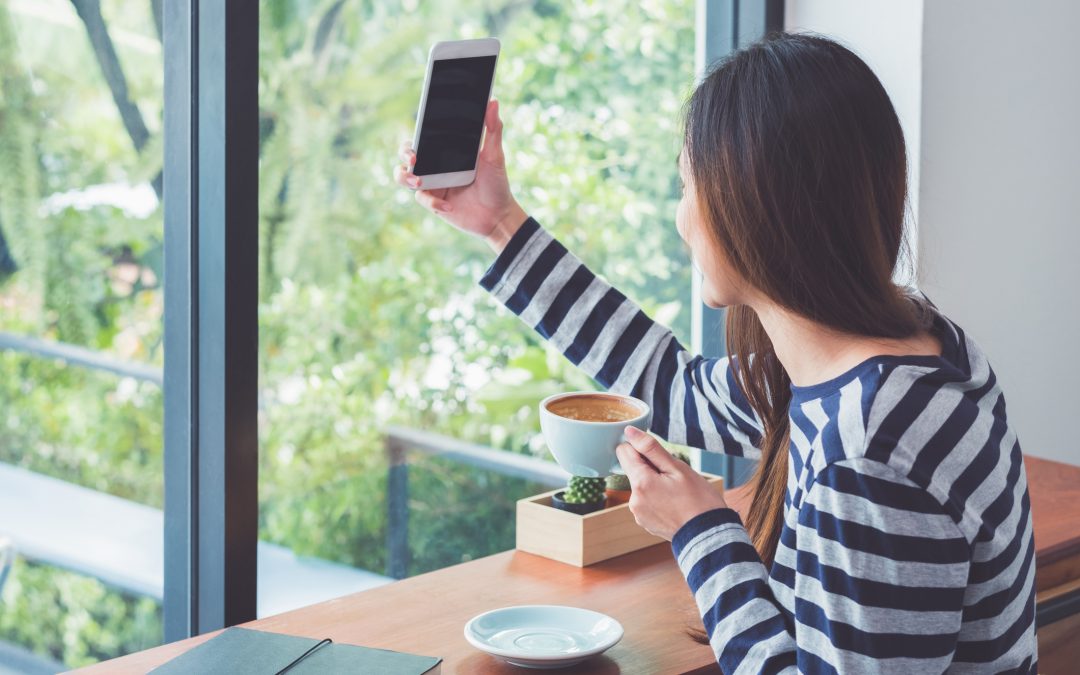 Should high profile bloggers give credit or pay special fees to take pictures in private locations? This is the question that a small boutique hotel called The Reading Rooms was trying to answer last week.

Estée Lalonde (@EsteeLalonde) a high-profile vlogger with over a million subscribers on YouTube and a significant base of followers in other social media decided to spend some days in The Reading Rooms in Margate. Estée paid the price of the room like any other person would, and didn’t make any other special arrangements whilst staying there. 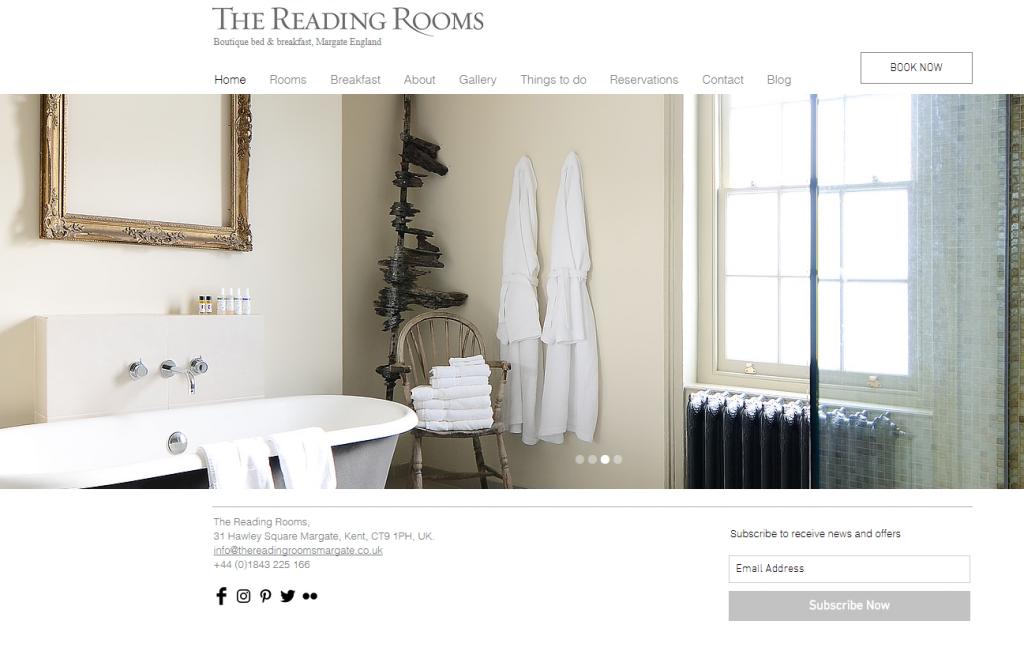 Like many others would normally do, she decided to post two pictures on Instagram: a selfie and a picture of her breakfast. Estée is social media savvy, and in fact collaborates with different brands on a regular basis. On those pictures, she decided to tag a few brands. Until here nothing unusual. An influencer sharing pictures on social media is not something that would surprise anyone, at the end of the day, that’s how they became influencers in their fields in the first place. However, for the managers of The Reading Rooms in Margate, this was not the case. 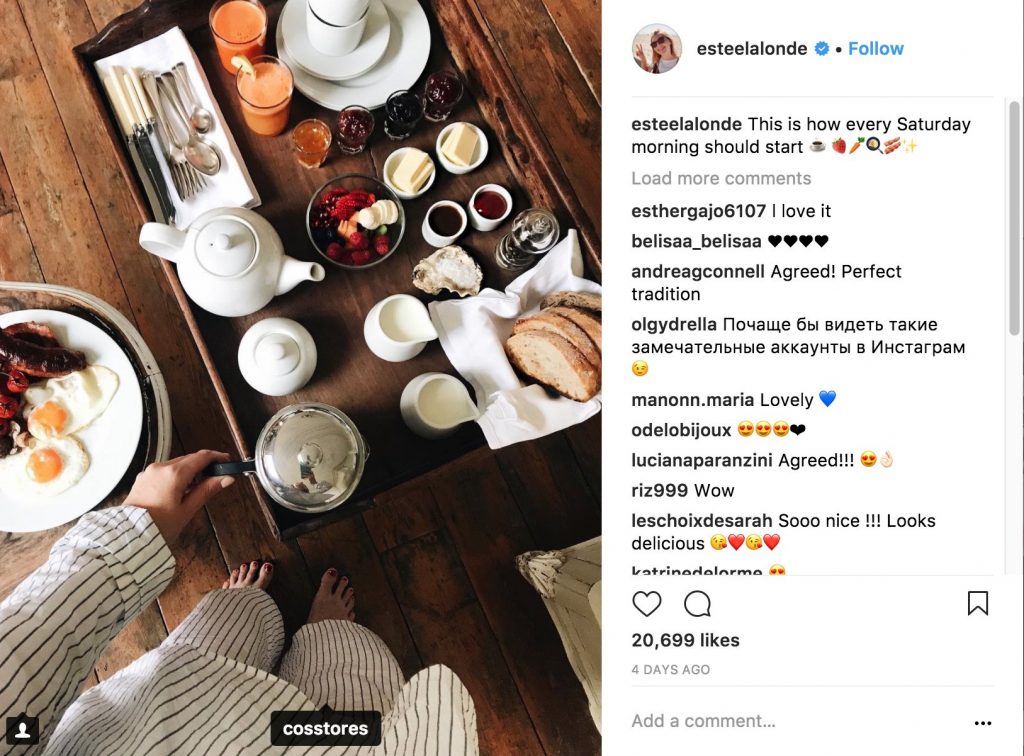 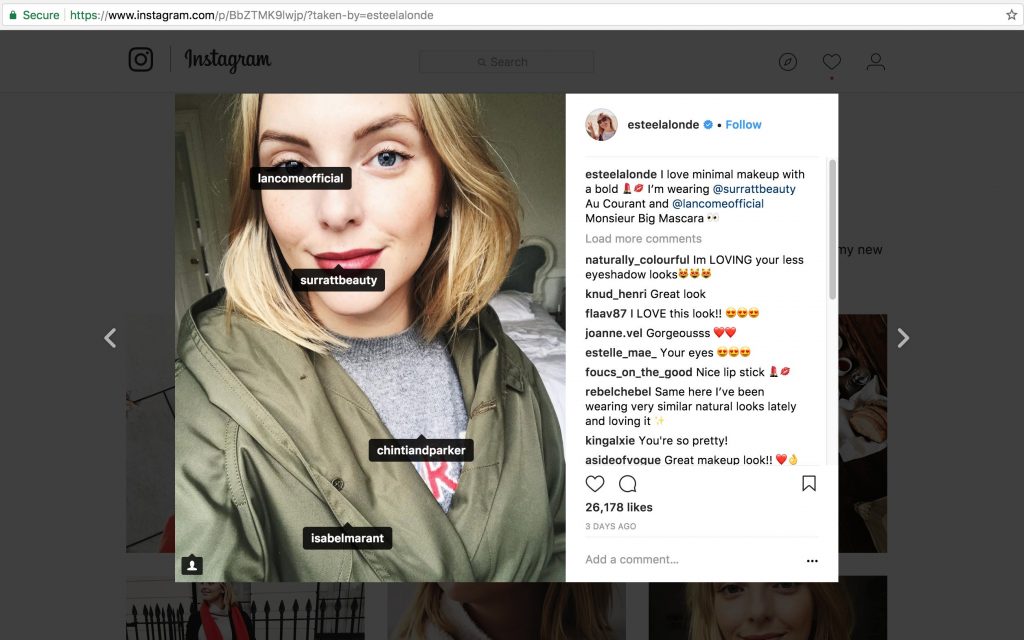 The owners and social media manager of the hotel found out that the influencer stayed in their place, and that a picture was posted tagging all these brand, but not mentioning the hotel. In a clear attempt to call out Estée and one of the brands for which she collaborates they tweeted the following: 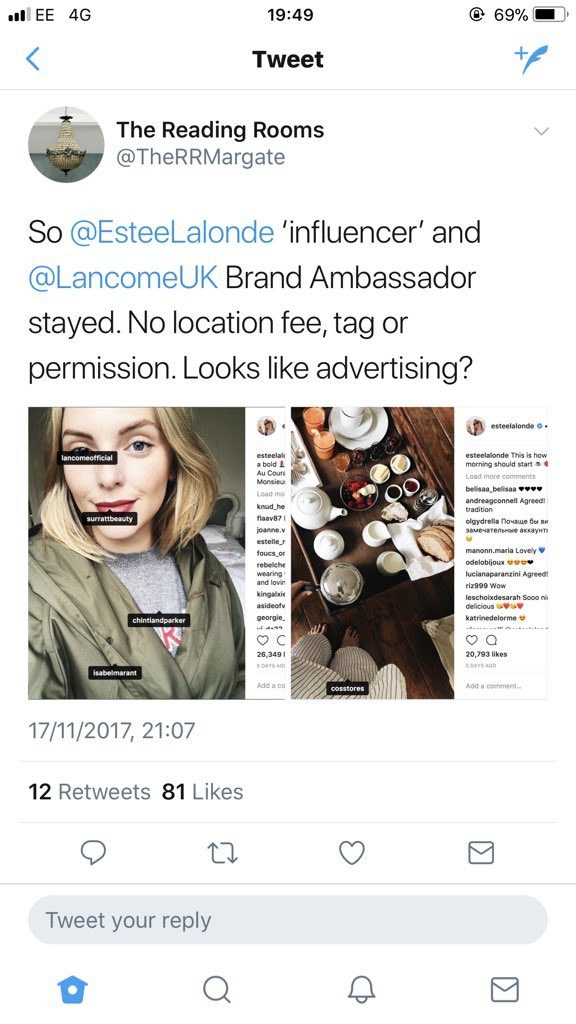 It also appears that the owners asked their friends to mention the brand on Estée’s Instagram as there were numerous posts referring to The Reading Rooms on those two pictures. 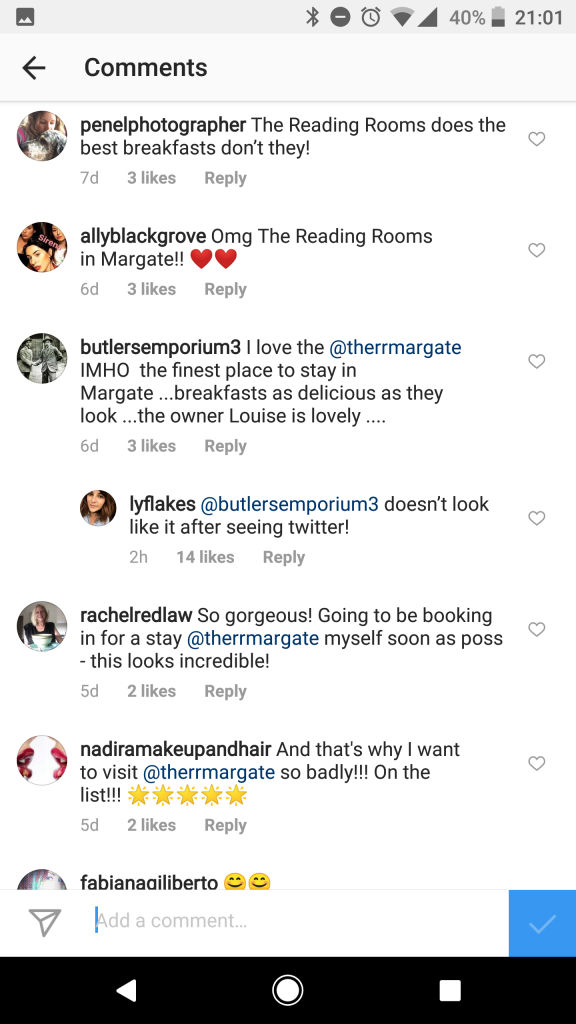 Based on the arguments that hotel’s account shared on Twitter, their views were that since Estée was doing advertising for brands by tagging them on their posts, the use of their premises should follow a commercial agreement rather than a regular transaction. The hotel is in fact used for photo shoots, and they have special rates for this advertised on their website.

Perhaps im stating the obvious here but her job is advertising and yours is hospitality? She PAID YOU for your services, you didnt pay her for hers and yet u expect a service from?! And FYI it seems you haven’t been all that hospitable?!

1. What happened re @EsteeLalonde & @TheRRMargate is incredibly depressing. Not least as it demonstrates what many still think: ‘influencers’ are cheap/free advertising mules, w’out any real legitimacy & can therefore be exploited & treated terribly.

Jesus Christ she took ONE selfie, not a full photoshoot with lighting and crew! The room is barely even a feature in the photos, get a grip and read up on influencers, you’ve massively put a whole community off staying here 🙄

Don’t you get it’s none of your business who she tags in her photos?! I’ve taken photos at @ClaridgesHotel before, not tagged them but tagged other brands. They are never anything but gracious! Maybe learn from them …

If I was Estee I would find this a bit harassing 🤨If this was an ad, which Lancome themselves deny, she would be required to state this on her photo. She paid you to be a guest. Influencer or not it makes no difference here, she is a guest who took a selfie.

Hundreds of people on twitter (mainly bloggers) just couldn’t make sense of this and defended Estée’s position. For them, it was crystal clear that the moment that someone paid for the room this entitles them to use the room and take as many pictures they can. In fact, many were of the idea that the hotel should be grateful if a blogger mentions them, but that they’re under no obligation to do so since no direct agreement was made between the blogger and the hotel.  Others also pointed out the fact that Estée was staying there as a private customer, and not as a paid activity. This might be the case. However, the fact that many influencers use their social media for personal and professional matters at the same time frequently blurs the two spaces. In addition, some agreements (like in the case of brand ambassadors) extend for a large period, rather than only based on punctual activities, making the distinction of when an influencer is just minding their own business and taking selfies like everyone else does or promoting a brand can be difficult.  The brand Estée has an arrangement with confirmed that this was not a paid activity and was willing to delete the retweet that they did about this post.

The marketer- Lancôme, has confirmed to you in email that this wasn’t affiliated with them. You need to drop this, you’ve made a mistake here, and by continuing to tweet about it is perpetuating the damage already done. For the sake of your business- STOP 🙏🏼

On this matter, the Advertising Standards Authority (ASA) provides a few guidelines on this matter. For the ASA, any marketing communications created by affiliates, members of the public acting as sales representatives and anyone contractually obliged to promote or advertise a company or product are equally covered by the Advertising Code and the ASA will consider the brand at least jointly responsible for the content. Ideally, any paid marketing communication should be identified as such somewhere in the post (#ad, sponsored by, etc.).  The code is clear; however, it doesn’t reflect the duality that exists between personal/paid blogging life that exists among bloggers. And this is quite understandable in a context that starts initially based on a passion on a topic or field.

Social media faux pas to learn from this situation

Complaining on social media has become a national sport, and putting brands on the spot, with the hope of gaining virality and therefore social pressure is common among some customers. However, when the brand follows this strategy to its customers, the situation can quickly deteriorate as in the case of The Reading Room hotel. In the rare case that a customer is in the wrong, it’s a safer strategy to try to solve this directly with that customer in a one-to-one interaction, online or offline.

With the hope of leveraging on this influencer’s reach on social media, people close to this hotel thought it would be a good idea to flood the comment section on that picture with positive reviews about their breakfast. I mean, look at the picture, the breakfast looks indeed glorious. But having all of the sudden a dozen of positive reviews after the twitter incident exploded does look quite suspicious, and people will pick up on it (as they did in this case). If you’re asking friends and family to review your product, at least ensure two things: (1) that they have tried the product, and (2) that is not blatantly obvious that all comments were coming from you. One or two comments would’ve done the job. More than that in such a short period of time …maybe not.

How did this story end?

At the end, the brand published a public apology for the way they handled things, and they were quite upfront and informative as to why they reacted that way. I read the thread and to some extent I get it. They have had experience from other professionals in the industry that indeed book the place for photo shootings. However, very likely this is done through more ‘traditional’ marketing and PR channels. The world of influencers and bloggers, on the other hand, sprung in the context of the Web 2.0 and social media, where anyone could just grab their phone and start sharing your daily life. That’s what makes influencers valuable to brands. They spontaneity and originality, and how people that are the target market of all these brands, can strongly relate and build bonds with the influencer.

Find out how different PR strategies on social media affect credibility, reputation, and trustworthiness of a brand.